The passing of Commissioner Carnevale

The Nassau Suffolk Water Commissioners’ Association (NSWCA) extends its deepest sympathies to the family, friends and professional associates of former water commissioner Augustine Paul “Augie” Carnevale, 1959-2022. Augie proudly served the residents of the Garden City Park Water District and was a member of the Long Island Water Conference (LIWC) and the NSWCA. He will be greatly missed.

Visitation will be held at the Park Funeral Chapel: 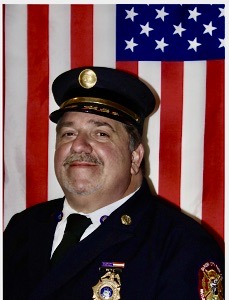 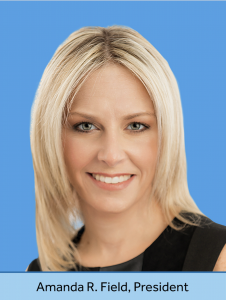 A century of service for Hicksville Water District.

For 100 years, the Hicksville Water District has proudly served the highest quality water to Hicksville residents. To help honor this monumental occasion, the District created an educational and fun resource to celebrate their history,  accomplishments and their overall role within the community.

While the faces and technology used to treat and deliver water  to the Hicksville community have changed over the years, the traditions of excellent service and a safe, reliable water supply remain the same.

The District also created a commemorative calendar with numerous  photographs from the District’s past 100 years including images of HWD staff, commissioners, superintendents, infrastructure and facilities. Please refer to the Hicksville Water District website at www.hicksvillewater.org.

Congratulations to the staff, commissioners and superintendent of Hicksville Water District on a job well done for 100 years!

The following is a response from former NSWCA President and current Long Island Water Conference Chairman and NSWCA Executive Board member Andrew Bader to a recent Newsday editorial of March 31, 2021.

The real problem isn’t the number of water suppliers in Nassau County, it is the pricing/taxing structure of one investor-owned water supplier (“Public fix for private water,” Editorial March31).  If the issues are resolved, the discussion of consolidation becomes null and void, as putting all water providers under one umbrella resolves nothing.

When has an all-encompassing Long Island utility proved it is more effective at providing service than a smaller one? Need we remind everyone of the failures of PSEG Long Island during Tropical Storm Isaias?

Consolidating water providers does not mean we need fewer water mains, wells or treatment facilities. There are little to no economies of scale in this regard. It also likely means the cost of water will go up for the majority of Long Islanders due to the significant debt burden. Why should the vast majority of residents who are happy with their water provider subsidize the cost for the buyout of another? What does the average resident gain?

Water is important, and consolidating control could be scary. The current structure provides accountability and responsiveness, things that can be lost with one overarching utility.

“GPR is a non-invasive imaging technology that uses high-frequency radio waves to detect subsurface objects”, stated Zander Seaman, Subsurface Consultant. “It is ideal for organizations seeking to avoid costly delays or damages that can occur when underground obstructions are unexpectedly encountered. GPR works by beaming high-frequency radio wave pulses into the ground and interpreting reflections received at the surface. The resulting images are similar to x-rays but without the risks of radiography. Field technicians interpret the images to determine the location and depth of utility installations, geologic formations and other objects in real time.”

In addition to the discussion on GPR and its use in locating underground structures, the NYLD presentation covered the theory of leak detection. Leak detection is the employment of advanced technologies to accurately locate a leak on a buried pipeline. The discussion included equipment employed in identifying and locating water leaks, the coordination effort between water department operators and the leak survey crews, and the advantages of system-wide leak detection surveys among other topics. The presentation was followed by a detailed Q&A session. New York Leak President Mike Goodfellow and Director of Operations Steve Darcangelo participated in the presentation and the lively Q&A session. 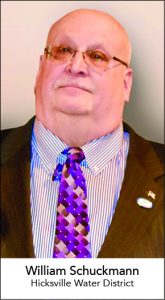 “Ground Penetrating Radar is a tool that is finding great acceptance in many fields, especially in environmentally sensitive applications,” stated NSWCA President and Hicksville Water District Commissioner William Schuckmann. “For example, for water suppliers and others in the water industry, GPR can determine depth to bedrock or water tables and identify metallic and non-metallic pipelines, water mains, subterranean storage tanks and cable banks. I greatly appreciate the detailed presentation that the representatives of NYLD gave to our audience. 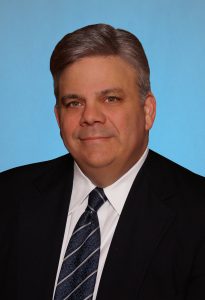 “I am extremely honored to be entrusted with this position by all of our dedicated members,” Mr. Bader stated.  “Water is the most vital part of everyday life, and I look forward to continuing to ensure all Long Islanders receive the highest quality water possible.” 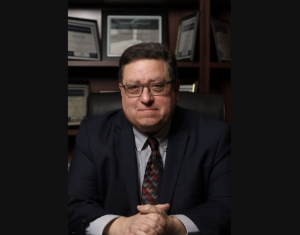 Mr. Bader, who was LIWC Vice Chairman  in 2020, has proudly served the Plainview community as Commissioner of the Water District since 2010. He served as President of the Nassau Suffolk Water Commissioner’s Association in 2017 and is an active member of the American Water Works Association (AWWA).

Voters in Nassau and Suffolk Counties have spoken recently electing or re-electing water commissioners in 21 Long Island commissioner-run water districts . Congratulations to all.

NSWCA President and Hicksville Water District Commissioner William Schuckmann commented, “Our members are unique in the water industry in that every Commissioner is elected by voters within each respective water district. This ensures that the majority views and opinions of the residents in each community are respected.

Every vote counts and every vote is counted. Given the impact of economics and environmental issues like water quality and conservation, this is more important today than ever before. I’m pleased to welcome all our new commissioners and returning colleagues in both Nassau County and Suffolk County as NSWCA members.”

The NSWCA congratulates the following water commissioners on their election and on NSWCA membership: 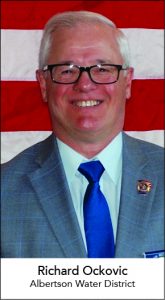 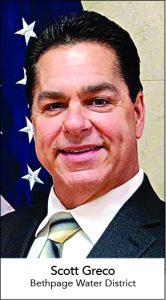 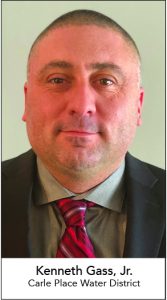 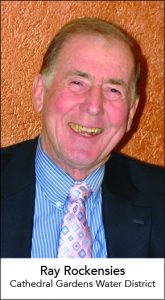 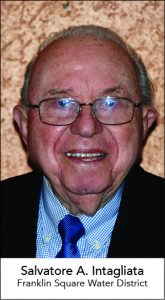 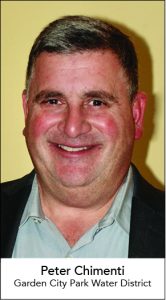 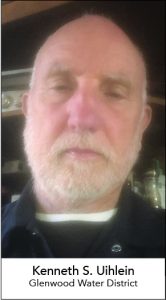 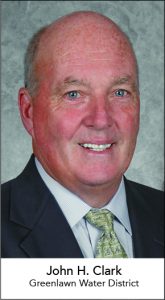 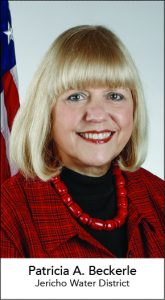 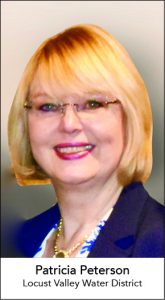 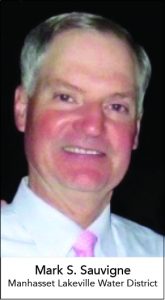 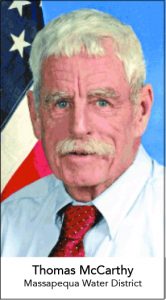 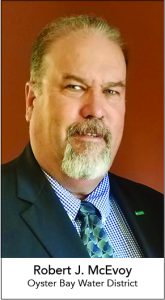 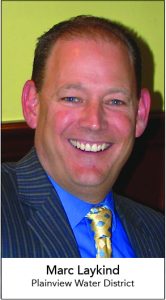 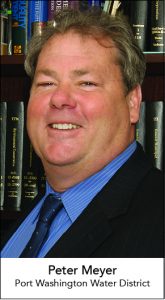 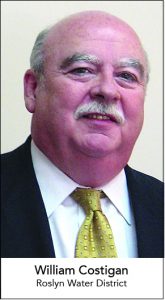 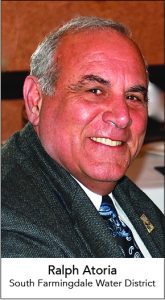 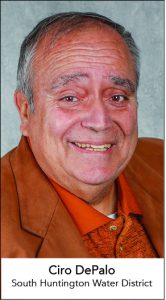 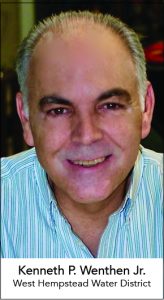 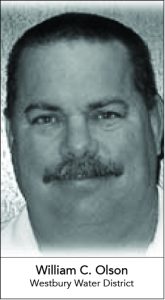 “There is a new space race today, and this one is underground,” Mr. Beyer stated. “On Long Island it involves lane issues for limited real estate, essentially creating a competitive environment for utilities such as electric, gas and water services. Given the region’s aging infrastructure, the need for an overriding management plan is paramount to secure the delivery of future services.”

Mr. Beyer also discussed safety measures that his organization has taken with the advent of the COVID-19 virus pandemic. 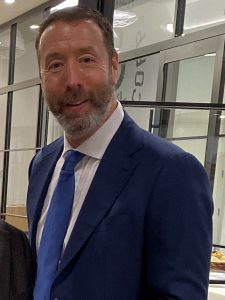 “Education begins with training our own people about the hazards of the coronavirus, health surveys each morning, and providing the necessary Personal Protective Equipment (PPE). This includes the use of masks and social distancing, sanitary processes like hand washing stations on all vehicles, and nightly truck sanitizing. Communications outreach to educate the public is the key to project success, including timing and project scope. At Bancker, we canvass the neighborhoods, outreach to homeowners in the affected zone via social media and continually work to make customers part of the process.”

NSWCA President and Hicksville Water District Commissioner Mr. William Schuckmann commented, “our Association represents 21 voter-elected Long Island water districts, who have the day in, day out responsibility of providing potable drinking water to more than 620,000 consumers. We are grateful to Mr. Michael Beyer for his state of the industry update and future outlook. Given the need for conservation and long term sustainability, and in view of aging infrastructure and other industry changes, we will continue to seek greater efficiencies and cost savings while continuing to be compliant with all New York State, federal and local regulations.”

Ms. Jill K. Gunzel-Lemke, CPA and Managing Member of JKL Municipal Accounting Solutions, led the presentation on the importance of proper budgetary planning, including revenue and expenditure estimates; proper implementation of a budget; and the continued monitoring along with the resulting financial performance of the budgets within the water districts.  Ms. Lemke is the managing member of JKL Municipal Accounting Solutions, LLC and possesses over 20 years of experience working with governmental entities. Having a significant concentration on financial statement preparation, reporting, accounting systems and controls, budgeting and planning, her extensive experience allows her to provide insight and advice to municipal clients on reporting, trends and best practices. 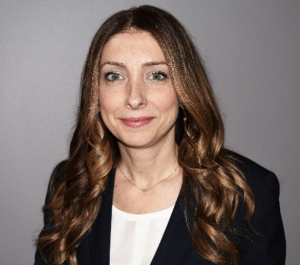 Hicksville Water District Commissioner and NSWCA President and William Schuckmann commented, “We were delighted with the presentation conducted by Jill. Running one of these sessions is challenging enough, but to handle this virtually has a whole other set of issues. Jill’s presentation was most informative and quite important to our members, as we are always cognizant of ways to improve operations, while also looking at both greater efficiencies and cost savings with our services at NSWCA. We thank Jill for sharing her insights, knowledge, and time with us.”