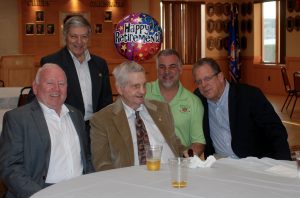 When Bill Ellinger recently stepped down from his position as Bethpage Water District Commissioner after 38 years of dedicated service, his send off party was attended by dozens of fellow commissioners, friends, relatives and associates. That was no surprise, given Bill’s gregarious and spontaneous personality. What was remarkable was the long list of public service achievements where Bill so often led the charge, including numerous well and infrastructure improvements, and the untold hours of negotiations to secure firm financial commitments from Grumman Corporation and the U.S. Navy.

A 38-year member and advocate on behalf of the NSWCA, Bill was named an Honorary NSWCA member earlier in 2017.  The entire membership of the NSWCA joins together in wishing Bill the best of fortune and good health in his retirement. His guidance and expertise will be greatly missed.