NSWCA Commissioners received an education and updating about recent changes in the Freedom of Information Law (FOIL) from FOIL maven Robert J. Freeman.  Mr. Freeman is the Executive Director of the New York State Committee on Open Government. Mr. Robert  Freeman has worked for the Committee since its creation in 1974 and was appointed Executive Director in 1976.

Every New York State or municipal department, board, bureau, division, commission, committee, public authority, public corporation, council, office or other governmental entity performing a governmental or proprietary function is subject to the Law.

The intensive training session is part of the ongoing NSWCA Training Series. The session was held at the Westbury Fire Department to accommodate the large turnout which also included District Superintendents and employees. 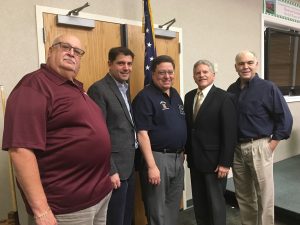 Mr. Freeman He received his law degree from New York University and a BS in Foreign Servicrom Georgetown University in Washington, DC.

About Mr. Freeman
Robert J. Freeman is the recipient of numerous honors, and in the spring of 2010, received the
John Peter Zenger Award from the New York News Publishers Association and was
selected by the National Freedom of Information Coalition and the Society of Professional
Journalists for their Heroes of the 50 States award and induction into The Open
Government Hall of Fame.