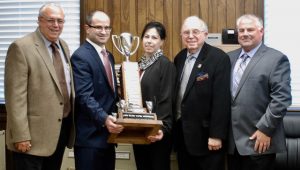 “We are extremely proud to receive this honor,” said FSWD Water Commissioner Ralph D. Pugliese. “It is a testament to the dedication of the entire staff of the District who work tirelessly to ensure quality and compliance for some 20,000 customers. District Superintendent John Hughes and my fellow Water Commissioners, Salvatore A. Intagliata and Madeline F. Presta are extremely pleased to receive this honor.” 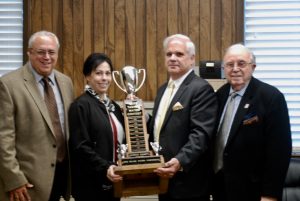 Commissioner Pugliese, a past President of the Nassau Suffolk Water Commissioners’ Association (NSWCA), also noted that the District’s mission has always been “to be vigilant in protecting our water quality and Long Island’s single source aquifer, as well as to promote conservation and sustainability. We work around the clock to provide top quality water to every tap via an infrastructure that includes 42 miles of water mains. This award recognizes those efforts.”

Each year during National Drinking Water Week, the LIWC invites Long Island residents to sample tap water from Nassau and Suffolk water suppliers in a blind taste test. Franklin Square received the most votes from the hundreds of contest participants. In addition, water experts were at the event to educate the public regarding the source(s) of their water and the invaluable importance of water quality, conservation and sustainability.

The Franklin Square Water District has delivered an uninterrupted supply of the highest quality water to residents since 1923, meeting or exceeding all New York State and Federal regulations, as well as industry standards.